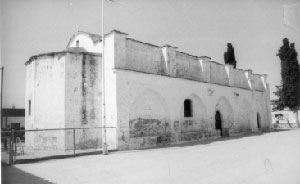 The year 1711 is incised at the top of the north gate of the church. The pulpit, the shrine and the reredos is from the last quarter of the 18th century, during the era of Archbishop Chrysanthos, as the internal inscriptions indicate.

The church was built on top of an older one, since images of the older church are saved up to date along with Icons of St. George from the 14th-century and St. John the Baptist from the 16th century.

A plank, saved up to today, is  placed on the earlier reredos where the images of Apostles were painted. On the existing reredos, the images of the Apostles are on separate planks, whereas during earlier times they used one plank for all the Apostles.

The church had a welcome room with arcades in the north, and another entrance – leading to the loft in the northwestern part both of which were demolished in the early 1960s.  The bell tower located in the northern part of the church was demolished around 1964.

During the early life stages of the church in the western part of the courtyard was the community’s cemetery.

To this day, the church operates daily for all kind of religious gatherings as well as for baptism celebrations and confession

The church was built around 1880 revealed by an inscription found on the main entrance. The bell tower was built many years later, in1929.

The images on the reredos are identified to be of Renaissance art chronologically estimated around the same time the church was built.

Buildings of the Christian Orthodox Movement of Athienou are located in the churchyard since the roads east and north of the church are part of its ownership. 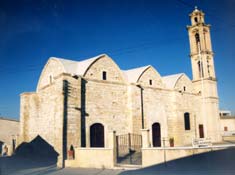 The present Church of Saint Fokas 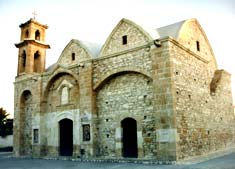 The new church (1947) just like the older one were both dedicated to the Birth of Virgin Mary. The foundation stone was deposited on 12.12.1947 by the Bishops of the Ecumenical Patriarchate, Derkon Ioakim and Sardeon Adamantios, who were in Cyprus organizing the Archbishop’s elections.

It first operated on the 21st of November 1959. The current form of the dome was formulated in 1994.

The reredos (from Italian marble) was placed in 1967 and the painting of the entire church was completed in 2012.

Its architecture is Byzantine while that of all the other churches in the village is Basilica. The stone used is local from the “Oros”. Today’s doors were placed in 1997 (the earlier ones were metal). In the Church the Holy Mass is celebrated (every Sunday and on major holidays) as well as the Holy Mystery of marriage.

The Church was built in 1994 at the edge of the village at a location in the middle of the distance from the occupied church. It was built through an initiative and donation from a team of locals led by Mr. Andreas Anastasiou Pantziaros. The older church of Saint Epiphanius is on a mount in the occupied village of Pyroi. Inside, and according to a testimony from Charidimos Chatzicharou, covered images of the Saint were found. 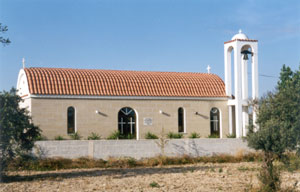 The chapel in the cemetery

The chapel was built in 1996 as a donation made from a local monk and painter Monk Kallinikos Stavrovouniotis. Images of Saints are drawn all over the chapel which is dedicated to the Resurrection of Lazarus. 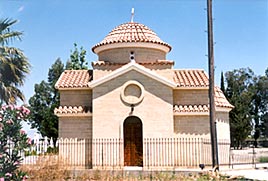 Inauguration of the restored Church of Virgin Mary (Panayia)

In 2011, the operations for restoring the church were completed. The Inauguration of the restored church of Virgin Mary was realized by the Bishop of Paphos, Mr. Georgios, on January 20  2012 within the framework of the celebrations of the three hundred years since the building of the old church and the completion of the restoration process. That nights’ Holy mass took place at the restored church.